If it were up to Justice Clarence Thomas, people convicted of crimes would be granted only one shot at a fair trial. And if the state doesn’t give it to them—well, tough luck. Earlier this week, the Supreme Court declined to hear Shoop v. Cunningham, a case about whether Jeronique Cunningham, a man serving a prison sentence for murder in Ohio, can present evidence of alleged jury bias in his trial. The Court’s decision leaves in place a lower court order permitting Cunningham to show that his trial denied him the due process he is owed under the Constitution.

This result infuriated the hell out of Thomas, who, joined by Justices Samuel Alito and Neil Gorsuch, dissented from the Court’s decision, which turned away the government’s bid to deny Cunningham the evidentiary hearing he sought. Instead, in time-honored Clarence Thomas fashion, he began his dissent by outlining the gruesome crime of which Cunningham was convicted—a crime that has nothing to do with the question of whether he received a fair trial guaranteed to him by the Constitution.

Cunningham has a few arguments about juror bias at his trial. First, he wants to show that the juror foreperson, a social worker, had existing relationships with the victims’ families, which she did not disclose when asked if she could evaluate his case fairly. Second, he wants to show evidence that she used information from outside of the trial, including social work records and opinions of her co-workers, to make her decision—and potentially influenced other jurors, too. In an interview with an investigator, for example, the foreperson called Cunningham an “evil person” with “no redeeming qualities,” and warned that “if you observe one of the veins starting to bulge in his head, watch out and stay away because he might try to kill you.”

If you only listened to Thomas’s cinematic dissent, though, you might think this case is about Cunningham’s guilt or innocence. “In 2002, respondent Jeronique Cunningham concluded an armed robbery of his drug dealer with a spray of bullets that killed a teenager and a toddler,” he writes. Later, begins his longer narrative by noting that on the night of the murder for which Cunningham was convicted, he and his brother—whom Thomas refers to as “the two robbers”—purchased crack cocaine.

Both longstanding Supreme Court precedent and also common sense dictate that jurors cannot use information from outside the trial when making their decisions. Courts that fail to uphold that basic procedural safeguard to people facing lengthy incarceration or execution might be cause for concern for the justices. But not for Clarence Thomas.

This is hardly the first time that Thomas has framed denials of procedural rights as righteous justice for victims of crime. In 2016, for example, Thomas dissented from the Court’s decision to allow Timothy Foster, a Black man, to present evidence that the prosecutor in his case removed all four eligible Black jurors from his jury pool. (The prosecutor’s jury selection list highlighted each Black juror in green, with a legend that explained the highlighting “represents Blacks.”) Thomas, however, could think only of the crime of which Foster was convicted: “Thirty years ago, Timothy Foster confessed to murdering Queen Madge White after sexually assaulting her with a bottle of salad dressing,” he wrote. For Thomas, the question of whether Foster deserved a trial by a fair jury was less important than the most shocking aspects of Foster’s crime.

In June, Thomas began another true crime podcast-esque dissent by noting that the defendant, whom Thomas described as “no stranger to violence,” had killed his victim “by stabbing him 75 times with a prison shank.” His recounting of the man’s record in prison reads like a dystopian box score: “Over his first 21 years in custody, Cassano participated in over 100 fights and stabbed four people,” wrote Thomas “Once, he stabbed a fellow inmate approximately 32 times before the victim escaped.” Again, Thomas camouflages his dismissal of criminal defendants’ rights with irrelevant distractions meant to convince the reader that this individual is unworthy of fair treatment.

Not even a dying man’s desire for spiritual guidance is enough to move Thomas, who in March dissented from the Court’s grant of John Henry Ramirez’s request to have a priest touch him during his execution. Again, even though the issue Ramirez presented was not about the crime he was convicted of, Thomas detailed, from beginning to end, everything he thought Ramirez had done wrong. “The saga of Ramirez’s crimes and the ensuing litigation warrants a fuller retelling than the majority provides,” he says, noting that Ramirez had stabbed his victim “29 times during a robbery that netted $1.25,” and that the man had “bled to death in a parking lot.”

Much of the Bill of Rights that Thomas is ostensibly responsible for upholding is concerned with the rights of criminal defendants. But for Thomas and the law-and-order reactionaries who adore him, once someone is convicted of a crime, they are no longer deserving of the Constitution’s protections. His dissents are designed to shock the reader and dehumanize the people asking for relief—part of the long conservative tradition of refusing to see people convicted of crimes as anything other than the worst thing they have ever done. 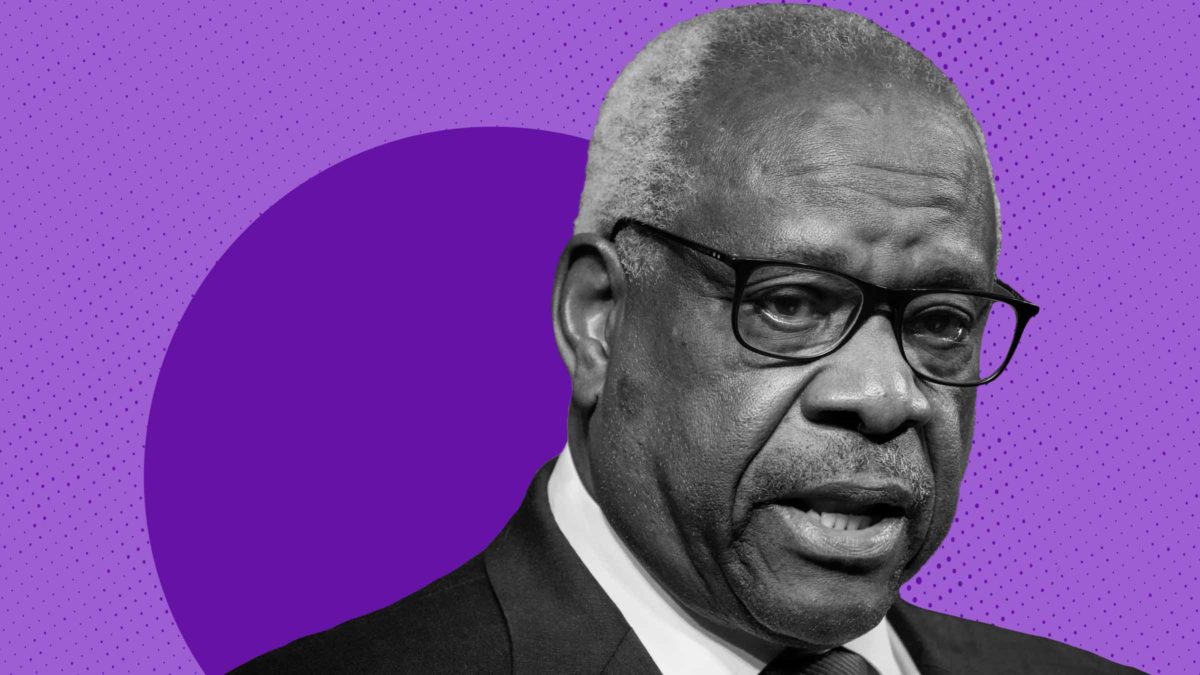 Link to: The Supreme Court Is Breaking Its Promises to Children In the Criminal Legal System